Peter: Hey Jamie! Thanks for agreeing to have a chat!

Jamie: No problem! Where do we start?

Peter: Well I’m trying to make these interviews feel like just a relaxed conversation and what I’ve found is it’s really hard to naturally start a chat when you’re doing it online, so I often start with the fact that pretty much everyone reading this is either a music nut or a performer or a recording professional of some kind, and we all geek about gear. So why don’t you tell me what kind of a setup you run?

Jamie: Well I’m at my home studio today. We have home studios that are essentially a mirror of The Mix Room, so it’s always allowed us to go back and forth. The Mix Room is set up right now with Source Connect Pro, which is kind of our main Source Elements product that we’ve used for, oh geez, five or six years now. And it’s great. Still to this day, that’s the way to do it. If you are streaming or if you’re connecting it. So we invested in Source Connect Pro because of working with a company out of Toronto called Technicolor, this big global post-production firm. Technicolor contacted us to do mixed streaming where the client would be streaming it live off the stage in Toronto with a producer there. And then we had a producer in Vancouver with us who wanted to hear and see full resolution picture and 5.1 playback. And that was the only way to do it, with Source Connect Pro. And we’ve also used Source Live, but not the current version with the in built-in chat and all that cool stuff. But we used that on an animated series. The director was in Los Angeles and it was a very cost-effective little tool.

Peter: How has working remotely changed for you guys in the last year thanks to you-know-what?

Jamie: Well we haven’t had a person in the studio for at least a year, but we’ve never been busier in our entire history!

It’s such a strange dichotomy, isn’t it? Like Fender sold more guitars last year than they ever have before, and it feels weird to see positives come out of such a horrible situation, but then, any positive at a time like this is very much needed.

Yes. I’ve had this very conversation with a lot of people in the post-production world, how of course we were streaming mixes long before COVID anyways, because of long-term contracts with companies in New York and London and all around the place. And we were always going to be streaming the mixes. They flew to Vancouver for the first number of them, the first three or four episodes, just to get the show up on its wheels, and then after that the plan was to just stream for the next two, three years of this contract. So we got into the whole streaming thing heavily, probably about eight months before COVID hit. So that part of it was just dumb luck, you know, that we were experts at it at that point. So in the past year we have mixed probably 85 episodes of television and two features remotely.

That’s amazing. Drop some names, tell us what kind of stuff you’ve done.

Jamie: Our main clientele are anime animation companies, animation production companies. So we’ve done shows and are currently doing shows for Netflix delivery and Nickelodeon, and a new Dreamworks show right now – I can’t mention the name but I can say that it’s a new Dreamworks show. We’ve done a lot of Lego Marvel animated shows. So the Avengers, Lego Jurassic World which was a blast, Lego Spider-Man, which was also a blast. And those were all in the last six or eight months. And then there’s a big show called Octonauts, which is a younger show we’ve been doing for quite a while and that’ll run for another two years. There’s a ginormous order of episodes. Uh, and then the Dreamworks show is also started.

Peter: It must be really satisfying to kick back and watch something that you’ve worked on, you know, see the finished product and know that you’re a part of it. I mean, Lego Spider-Man, Jurassic World, those things are huge.

Jamie: Yeah. That’s it, that’s the buzz, you know. That’s always been the buzz for us. And you know, for any of us audio dorks who really get into sound, animation is by far the most fun, not just because of the content – but the content is amazing, the writing is amazing and the voice actors are amazing and everybody’s at the top of their game – but from a sound point of view, it’s art. There is nothing that exists of course, and everything in the entire world has to be created, from a sound point of view. And those are the dream gigs.

Peter: I’ve always wanted to know about this. What does the client provide you with?

Jamie: The show is edited together: picture editors do that work in conjunction with the script writers and all the folks involved in production. Once the show is locked to time, they then send us an an audio export out of their picture edit system, along with a broadcast-quality Quicktime for picture. So those are the two elements that we receive. The audio is basically just dialogue as an AAF file with some temporary sound effects that the editors have put in to help to help sell the cut, because before they lock picture the edit of the episode has to be signed off on by the broadcaster or the streaming company or whoever the client is. So they use some minimal sound effects to help sell the cut, and then we take it from there and do a complete feature film-level sound cut in terms of everything you can imagine: if it moves, it’s got a sound.

Peter: Where do those sounds come from? You must have quite the library, between commercial sounds and Foley.

Jamie: We have a great Foley team who work on the episodes and they do a wonderful job. It’s just such an amazing art, it truly is. Like, they call them Foley artists, and they really are that. It’s a true craft to be able to look at the picture and then come up with the props and all the stuff that’s actually going to create the sound that will make that picture believable.

Peter: Since a tiny, tiny age I was fascinated with this process because my great grandmother used to play violin at the silent movies when she was a teenager. There was a little group of musicians and they would do live sound effects and music.

Jamie: Exactly. So that process for us, we have enormous libraries now at this point after so many years. You sort of build your library as you go. And every show will develop a whole array of custom sounds for that particular show, and they just get added to the master library, so after many years the master libraries are ginormous.

Peter: And I imagine if you’re doing something like say, the Marvel stuff, there might be signature sounds that they would provide you with the sounds for a particular weapon or whatever?

Jamie: That’s exactly what happens. Skywalker Sound sent us a relatively small library of the custom signature sounds for like Iron Man’s jet. The same thing happened for Spider-Man and for Jurassic World, because they such signature things. We would take that library and that was kind of the starting point, but they developed those sounds for feature film playback environments, and for that particular moment of that particular thing at that time, that was a great sound, but they don’t necessarily translate to the small screen, to a television mix, so we would take those sounds as a starting point and then augment them and then build everything around them to sell the scene.

Peter: So you started as a musician. Do you still play? Does The Mix Room handle music?

Jamie: The Mix Room is entirely aTV and film, but we work with a lot of composers of course. They’re all independent guys, and that’s a part of the turnaround process. Generally on an episode of an animated show we’ll have roughly 10 working days from lock from when we get the materials to delivery of a pre-mix, And the composers are working in that same sort of timeframe. So it’s a pretty tight ship. Everybody’s really gotta be on their game or else it just turns into a train wreck.

Peter: And what’s your music history?

Jamie: Music history. Well, I was a big sports kid when I was little and then about 15, I discovered music and girls, of course. And then I never looked back, you know, got into bands and all that fun stuff, and then I hit the road basically from 18 til 26.

Peter: Oh, that’s a hell of an education.

Jamie: Oh yeah. I mean, there’s no better way to hone one your musical chops than to play six nights a week.

Peter: And in situations you can’t control, you know. The amp breaks down, you’ve got to play with a totally different amp you’ve never used before and the sound is totally different, but there are still hundreds of people who need to be entertained.

Jamie: Exactly. My main instrument is drums, but some guitar and I have a basic basic knowledge of piano and the keyboard. If you’re working in studios, that’s the instrument that everybody can sort of relate to. If you’re producing with a singer, you can show them the melody, you know? So it’s a great root instrument.

Peter: Well thanks so much for your time. This has been a really fun chat!

If Adventure Was Easy, Everyone Would Do It Karen Saltus is a voiceover and narration talent who has been heard around the world for such… 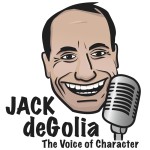 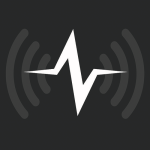